This is the Second of Three parts describing our wedding in India last month. Read Part 1 here and Part 3 here.

The planning had to start with a complete acceptance by everyone involved regarding the small scale of our wedding. And this is where I was so happy to see all of us come together to plan the wedding – suggest ideas and make compromises. Turns out, it is much much easier to get everyone’s approval for the details in a small scale wedding than in a full fledged wedding! Who would have thought!!???!? Yes we had a few instances of disagreements that required negotiation on my part but in the end all things were agreed upon.

Then we had to figure out the venue – which actually ended up being the easiest of all decisions. We simply decided to have my wedding at my home!

So what about the guest list? Who to invite, who can we skip? This was after all the biggest sticking point between my parents and I in all previous discussions. My parents inevitably wanted to invite people they knew but whom I had never met and probably never would, and I was dead against it. The cliched thinking of “How can we not invite X when we have invited Y?” or “X invited us to their son’s wedding so we have to invite them to ours” was in full play. But we found a way out without having to actually make any compromise as such. Our home could accommodate about 45-55 people at most, so our guest list had to be planned accordingly. As it turned out, my parents have been doing a small ceremony every year for the past 12 years at my home where they invite about 40 of their close relatives and friends. So they pretty much took that list, added a dozen more and we had our guest list at about 55!

But what about the ceremony? How elaborate would it be? That was the biggest sticking point with my wife. Overly long and admittedly redundant ceremonies were her (and to an extent my own) complaints from our first conversations about the wedding. But then who comes to our rescue other than our own Purohit – the priest in charge of the ceremony itself?!?? He was more than happy to conduct the wedding ceremony and be done with all of it in less than half an hour! My parents (especially my dad) and I have some strong opinions against practices like the ‘Kashi Yatra’ and ‘Vara puja’ – the former redundant, and the latter just plain inappropriate (and should probably be made illegal) – and we were definitely going to avoid that. In fact, of all the different parts of the Kannada wedding ceremony, we only planned to perform the Mantapa puja, Mangal Sutra tying and gruhapravesha. (The kanya daana and nischithartha parts were performed previously while we took our vows in Des Moines). Our Purohit was more than happy to facilitate this simple wedding! 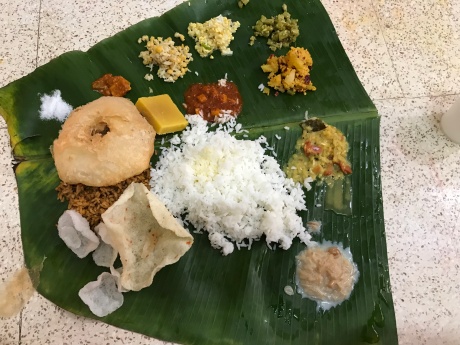 Moving on to an equally important facet of the wedding – the food! Of course we gotta talk about the food! We had arranged for one full fledged meal for the afternoon of the wedding with the usual gamut of wedding dishes – Savige Paaysa, Puliyogare, kosambri, Usali, beans palya, aloo palya, Kootu, Majjige huli, Pineapple gojju, rice, rasam, aloo bonda, mysore pak and Chiroti. (I had specifically requested that the chirotis be smaller in size but the cook provided normal big sized chirotis. When asked about it, he candidly remarked “Sir our cooks cannot comprehend the idea of a small chiroti!”) We had also arranged for breakfast for about half the guests (Idli, chutney, upma, coffee, tea). And that was all we arranged for the food! End of story!

Wedding gifts was one aspect that I did not interfere even slightly because I knew it meant a lot to both our parents. Gifting nice silk sarees to all the women in both our families was something that they took a lot of satisfaction in and I was in no way going to cast a blot on that experience – in spite of the costs involved. This was one thing I was more than happy to step back from considering all the compromises they did for the wedding.

When it came to our wedding attire, I wore a silk dhoti and shalya that belonged to my dad for the actual ceremony, after which I changed into a silk Kurta and a Koti – both gifted to me by my in-laws. Devanshi wore a silk saree with some basic jewellery for the ceremony  and a nice flowing lehenga after that. I was very happy we kept the cost of our clothes to a minimum considering the circumstances.

We never printed any invitation cards and simply called everyone to invite them. Nobody seemed to complain and everyone showed up! So I guess it was fine??!!?

And that was all the planning we did for the wedding!

The evening before the wedding, my mother surprised us all with a very cute wedding cake that she had ordered (and no one knew about). I had all my aunts, uncles and cousins and we spontaneously decided to play music and dance together. So for the first time, I saw my parents, aunts and uncles dance. Come to think of it, it was the first time they all saw me dance since I was probably a kid. And we all had a great great time dancing to old 90’s songs, gharba songs and even a song (“Masthu Masthu Hudugi Banthu”) from the movie Upendra! This has to be put in perspective because nothing like this happens in typical South Indian weddings. As ridiculous as it may sound, we were actually breaking new ground in a South Indian wedding with the whole dancing and singing. It definitely helped that my wife is from a state where they definitely know how to have fun at a wedding! But overall, even though the dancing was a spontaneous activity, we all enjoyed it and I was very grateful for my mother to have planned anything at all for that evening. 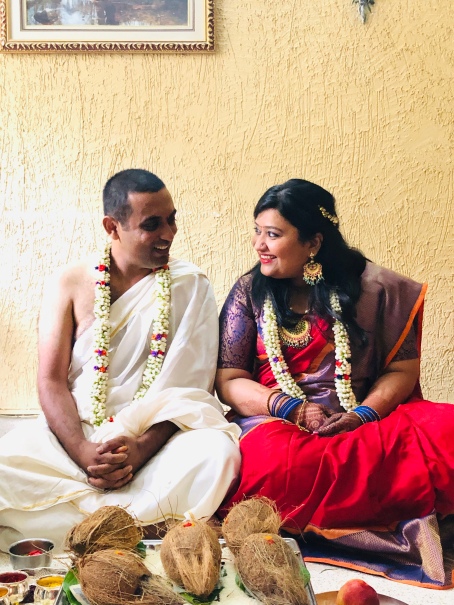 On the day of the wedding, things couldn’t have gone smoother and easier. Both our parents were up at 630 or so and they performed the Sankalpa around 8 AM. Devanshi and I got up around 730 and were seated at the ceremony around 930 AM. Most of the guests had arrived by then and some had even had their breakfast. The purohit performed the ceremony for about half an hour – a rather simplistic ceremony. At the right muhurtham, I tied the mangal sutra knot, everyone showered their blessings with the akshathe and we were pretty much done by 1015 AM! Devanshi and I sought the blessings of our parents and all the elders in the family, and they in turn blessed us and gave us gifts. We then did the gruha pravesha with her knocking over a glass of rice and entering my house (again) – this time as my wife and as a daughter of the house. Everyone had their lunch between 1 and 230 PM and were pretty much gone by 3. Then we all went to visit my grandfather to seek his blessings. We rounded off our wedding day with a visit to the nearby temple – the first time as a married couple.

The whole wedding ended up being completely stress free and without any issues. Though I was personally very happy with the small scale of the wedding, I was very curious to know what all the guests thought. In this day and age where weddings are getting bigger and bigger, here we were having our wedding at our home with about 50 guests. Approval from the elders in my extended family is something my father has always valued and he was understandably hesitant while we planned the wedding at my home.  After all, this had never been done in our extended families and possibly among all our friend circles. Would people opine that we should have had a full fledged wedding as a matter of general principle? Or would they accept this for what it was and just move on to the next big wedding?